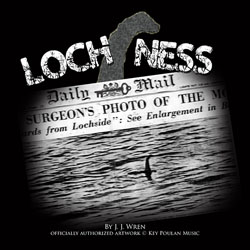 
Loch Ness takes us on a musical journey that transports us to the distant shores of the legendary lake where the Loch Ness Monster awaits. “Breaking the Surface” begins at the edge of the vast waters. An eerie silence prevails as onlookers wait in hopes of witnessing the mysterious mistress of the lake. Her presence just beneath the water emanates through the crowd and the air itself seems to change. In an instant, Nessie breaks the surface, brazenly revealing herself! Pandemonium ensues as people scramble to catch another glimpse, but Nessie has vanished!  Loosely based on the Scottish folk song The Ballad of Captain Kidd and American folk song What Wondrous Love is This, “Nessie in the Deep” reveals Nessie in her natural habitat. We travel with her as she explores the underwater haven that has belonged to her and her ancestors for hundreds of years.Back on shore, the hunt is on. Frustrated by their brief encounter with the monster, the men vow to capture her. The “Evasion” ensues. The men put forth a valiant effort, searching first one place and then another. No stranger to the game, Nessie entices them, revealing only hints of her form. The men close in, sure of their victory, but Nessie, having had her fun, slips lithely away.  The show concept and score were created with both the performer and designer in mind. Loch Ness offers plenty of opportunities for theatrical enhancement and can be used educationally as a focus on themes and motivic material. The originality of the show not only makes it fun to prepare and perform, but also captivates the audience from beginning to end. So get ready and experience the unknown world of Nessie, the Loch Ness Monster! Catch her if you can!

FUN FACTS ABOUT LOCH NESS
1.  The surface area of Loch Ness could hold the population of the world 10 times over.
2. Residents around the loch created an old wives tale to keep their children away from the lake. They said that a beast lived in the loch who transformed into a horse when it was hungry and waited for a traveller to climb on its back. It would then gallop into the loch and eat its victim.
3. There have been more than 1,000 recorded sightings of Nessie.
4. Nessie is said to have two humps, four flippers, a tail, and a snake-like head.