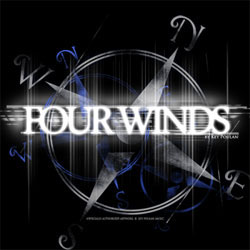 
In its original incarnation, Four Winds was performed in the four different quadrants of the field, one quadrant per movement. Inspired by the winds of the world, there are many different ways you can visually approach this show, focusing on gusts coming from each direction to carry the band to wherever each new movement is staged.

Mvt. 1: "North" focuses on the cold, icy winds of the Arctic. The introduction is somewhat dark, yet playful. The heroic main theme for the show is introduced at the musical climax.
[ Download ]


Mvt. 2: "West" picks up speed and is rather ominous; inspired by the natural disasters that permeate the Plains states and the far west...tornados in the former and wildfires in the latter spurred on by the Santa Ana Winds.
[ Download ]


Mvt. 3: "East" melodically takes us to the Middle East with an exotic sound that leads to equally exotic imagery, the combination of musical elements easily conjuring images of camels crossing the dry, barren desert.
[ Download ]


Mvt. 4: "South" is an epic of grandeur and wanderlust, as if the winds of the South Pacific inflate the billowing sails of ocean vessels plying the trade routes between the Old World and the Far East. Heroic and majestic, the music propels the wind through a massive push that blows everything in its path to the side, culminating in a final statement of grand adventure and triumph.
[ Download ]