In the Beginning (Full Instrumentation) 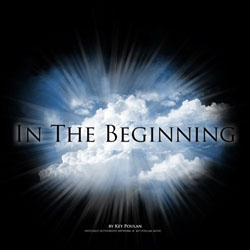 
In the Beginning interprets The Creation as portrayed in the Book of Genesis. The oldest story in the history of humanity comes to life in full Cecille B. DeMille extravaganza, full of poetic imagery and sounds that paint a picture of each of the three movements. This opens up the visual possibilities for sets portraying pictures such as a re-creation of Michelangelo’s painting of God touching Adam that is found on the roof of the Sistine Chapel, as well as visions of the seas and plains and the animals that inhabit below the waves and above on land. (Also available under the title of “The Natural World”)

Mvt. 1: "Let There Be Light" commences with a great swirling of sounds that build up to the opening hit, like the cosmos being molded into the planet Earth by the Creator's great hands. This opening effect is literally based on the rhythm of the words of Genesis 1:1, "In the Beginning, God created the heavens and the Earth." We then hear the command of "Let there be Light" through the music at a point where the music suddenly lifts up as if rays of light are shooting across the skies.
[ Download ]


Mvt. 2: "Land and Seas" is a grand work that speaks to the imagery of the great oceans and large expanses of sprawling land that cover the planet. Picture the virgin earth, just molded into shape, with dense, lush foliage and great waves crashing majestically on the shores of the continents. The music ebbs and flows with the tides and is imposing in capturing the wonders of the earth's creation.
[ Download ]


Mvt. 3: "The Living" imaginatively captures the wild plains of Africa, full of all sorts of animals in herds. The exotic sounds that convey these magnificent animals also catch them racing across the plains...a majestic sight to behold. The piece climaxes with a return of the quote, "In the Beginning, God created the heavens and the Earth." At the end, all that is left is the knowledge felt by everyone, "And it was good."
[ Download ]